Oh hello everyone, is it October already? I'm still working on my September post… since September is my birth month, it's always a good time for looking back and pondering, before realigning with my intentions.

Well, this particular September has been rich in such occasions  :o)

But right at the end of September, we had this wonderful lunar eclipse that deserves a post in itself – did you get a chance to see the whole process?

(And were you affected by the experience in some way?)


This was a Supermoon, at her closest to the Earth. (Yes, the Moon is a feminine character in many languages, including my own imagination  :o)

I knew that in Montréal, the eclipse would start around 8 pm, and the Moon would remain in the Earth's shadow between 10 pm and 11:30 pm… but I really wanted to watch it from my "high place" on the Mont-Royal.

So I brought a woollen coat, a blanket, a thermos, and a tripod  :o) 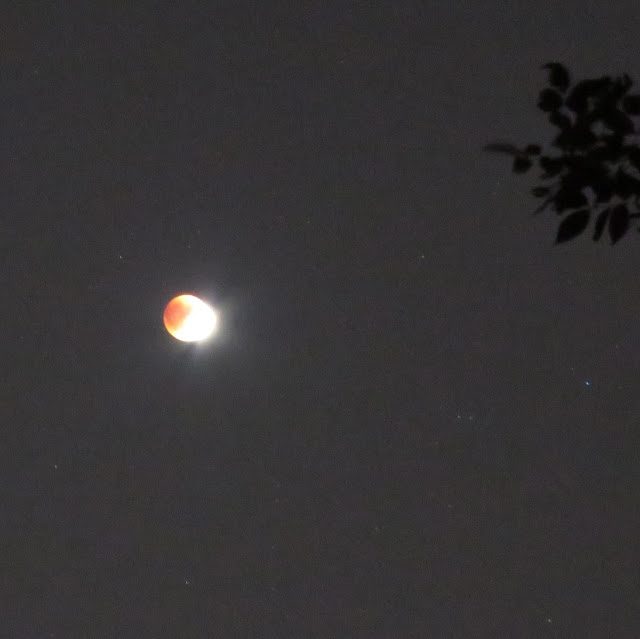 The first thing that surprised me was the quality of the silence. I was aware that other people were observing the Moon from the hilly cemetery (where there are no city lights), but they were few and whispering, and close to the alleys.

Otherwise, the world was quiet.


The remaining light was somehow aspired by the sky, diffusing a mother-of-pearl, reflected glow that shimmered on your eyelashes, blurring your vision.

But then if you looked directly at the Moon for a while, instead of seeing her as a rounded object you began to perceive her shape as a white, shining hole in the dark dome of the sky…

And suddenly, you could see the huge shape of our Earth coming upon this hole, closing it slowly, from outside the dome.


Though of course, it was just the wide, impressive Earth's shadow. 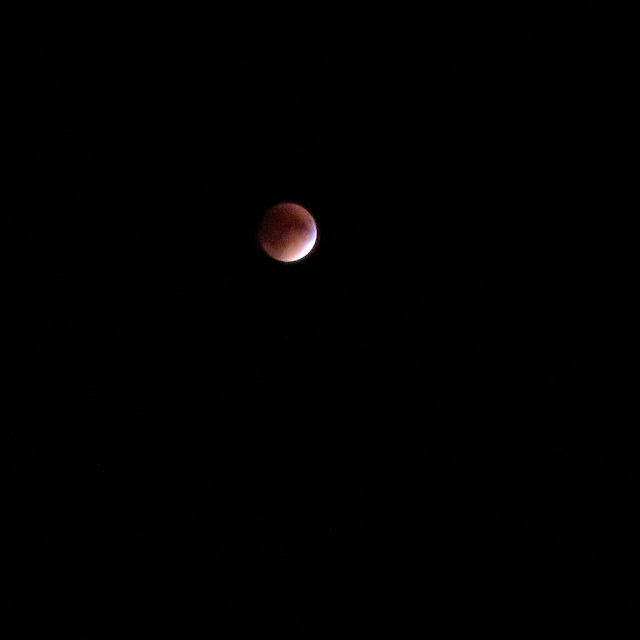 I noticed how small the Moon appeared now, but also three-dimensional.

Direct sunlight lends a flat aspect to our satellite, whereas the refracted light from the Sun through the Earth's atmosphere, during an eclipse, creates a warm glow in which the spherical shape of Moon is subtly revealed…

In a wonderful, translucent apricot hue. 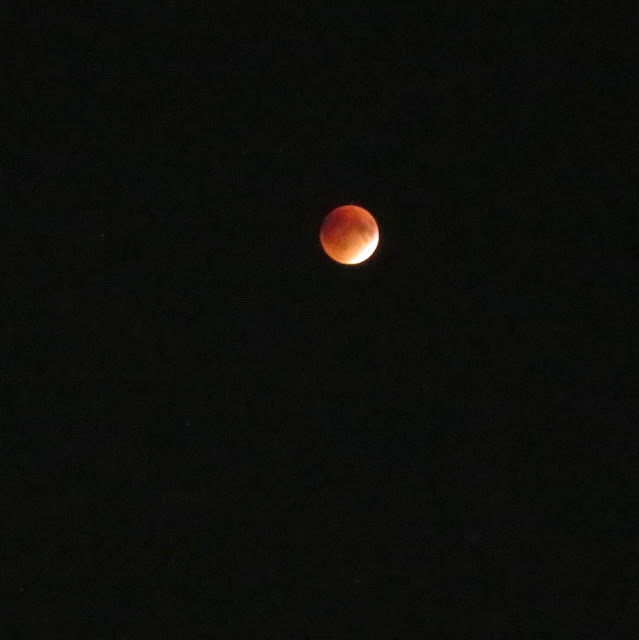 To me, she was truly like a small healing stone suspended in the sky, with some mysterious light shining through.


I spent some time absorbing all this, watching in quiet awe, feeling grateful for this unexpected intimacy with our wise, faraway, friendly guide.

Wasn’t it like being introduced to a secret side of her personality? 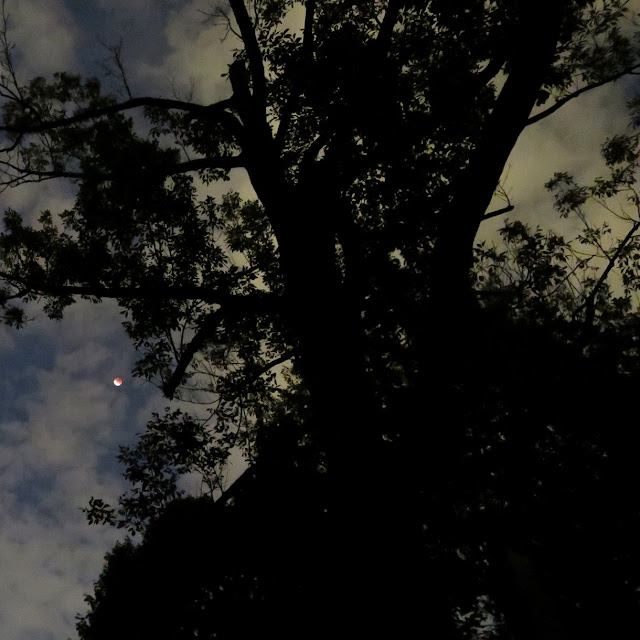 Then a blanket of clouds delicately covered the Moon – as if to shelter her small, blushing shape.

So I just waited for another indefinite stretch of time, catching glimpses between the clouds, doing yoga on my blanket (and in my coat), mostly the seated forward bend to keep warm!

And then the Moon began to reappear, still partly hidden by the clouds. 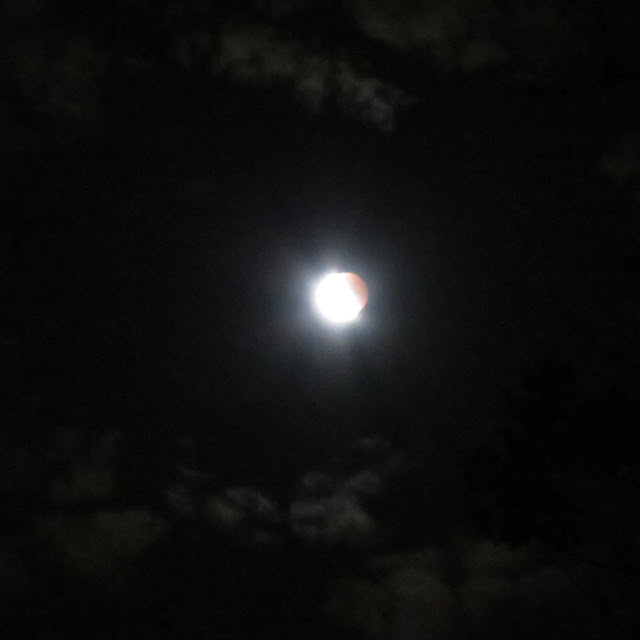 All the while, the Moon had continued her course around the Earth, sliding between the ancient Elm's branches. 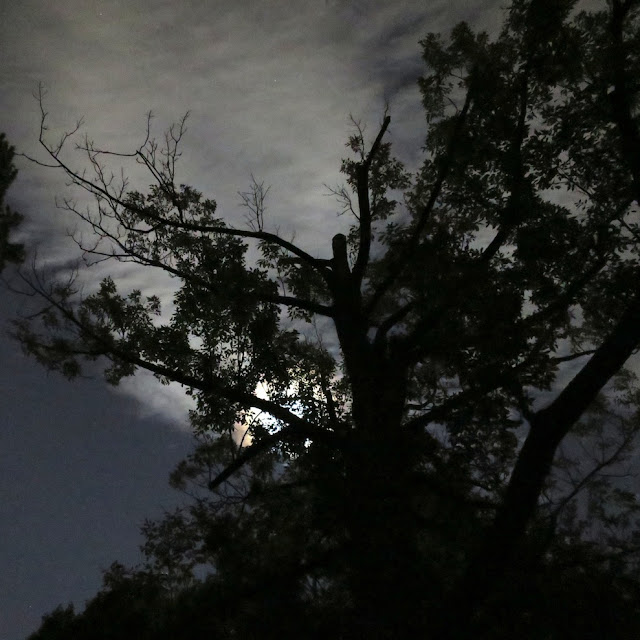 …which gave me this Sarah Moon picture  :o) 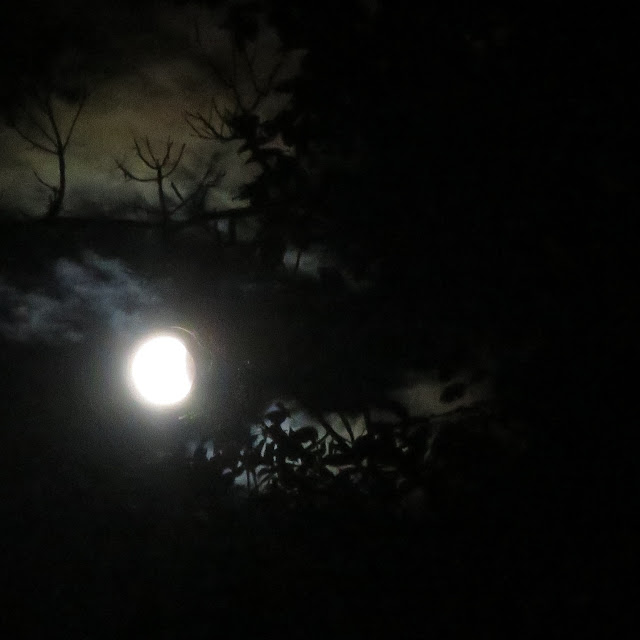 There was even a Moon Rainbow!

For a while, another cloud blanket covered the Moon as she was getting brighter, still diffusing rainbows... 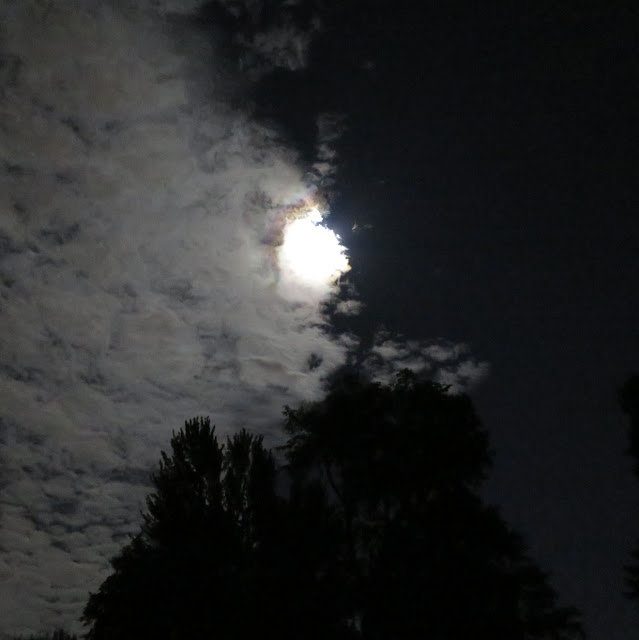 Then she appeared again, and the world was revealed.

Inexplicably, the air was warm, I could somehow feel every plant pulsing with joy – I wanted to dance, and laughter was welling up in me. Oh, what a delicious surprise! I was so happy to be there, in this magical place and time.

As I rode back from the hill on my bike, the wind was blowing again, and it quickly became quite strong, sending turbulent, summery gusts down the empty streets, shaking me as if to say: hey, did you see this?

When I got home at last, eerie moonlight was flooding the kitchen, illuminating one happy Lola.


But in the morning, I found that the eclipse had deeply affected me.

You know, like when you wake up sad and perplexed from a dream you can't remember, yet the feeling remains with you for days? 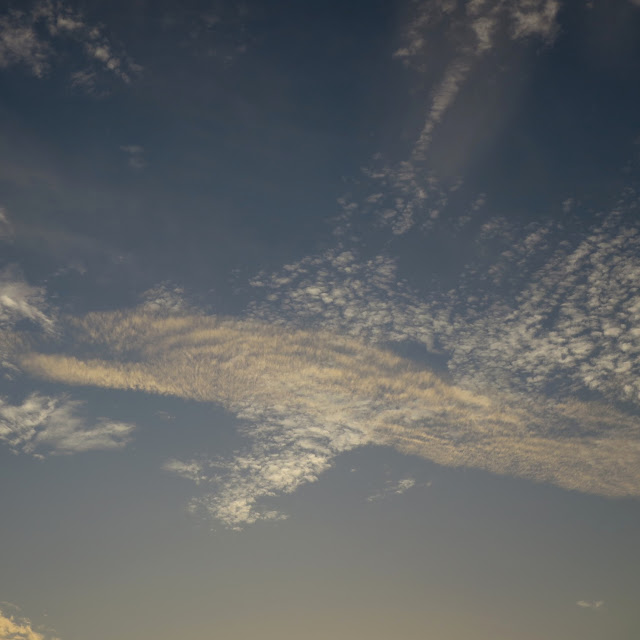 In retrospect, I realized there was a mysterious shift that night, probably prepared and intensified by the wonderful Harmonizing Concert I had attended the previous evening (details to come), which had apparently attuned me both to the cosmos and to who I really am.

So when I woke up after the eclipse, it was really as if I had lost the ability to control (more or less, as I had done so far), both the intensity of my perceptions, and my wildly empathetic nature.

And what good was that, I wondered sadly, if such empathy kept me away from joy and faith, preventing me from doing good stuff on this Earth?

Stories from refugees made me weep, and despair from humanity. I walked around hopelessly in my apartment, until it was time to go to work. What was the point of it all? How could anyone be merry when such things kept happening all the time, literally every day on Earth? Relentless, purposeful suffering caused by humans to other humans? 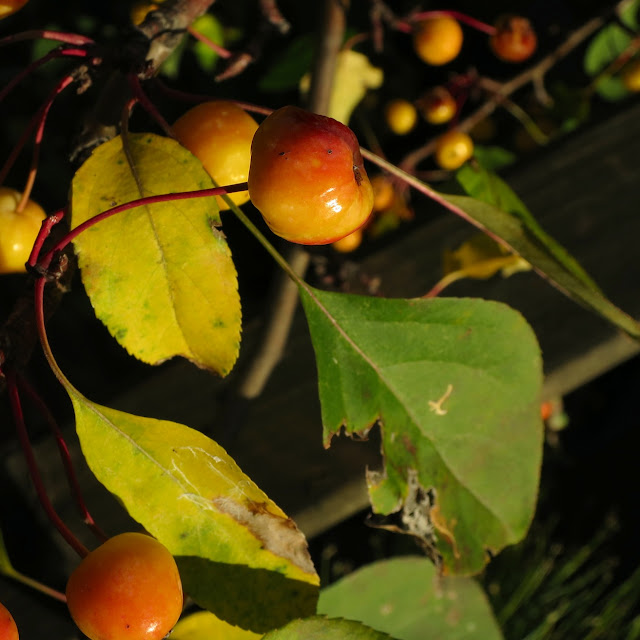 Somehow I could not bring myself anymore to eat even organic eggs, nor to wear the soft chocolate suede coat a friend had given to me. A panic welled up in me at this very thought, as if I was afraid to be telepathically connected with the bird/animal's sad life (and death).

And then, by and by, I noticed a pattern here. 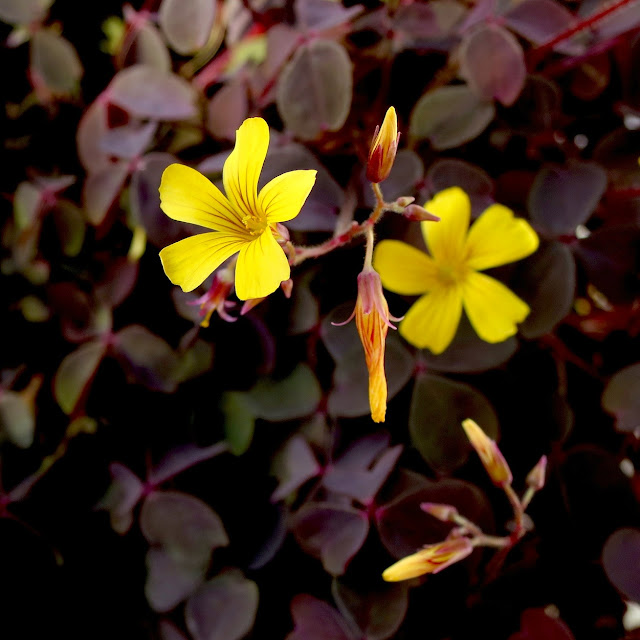 I could not even turn empathy into compassion because the visceral fear of being hurt, overwhelmed, dissolved by this suffering (everywhere), was preventing me to root myself in love.

And fear is the opposite of love, they exclude each other.

Today, I only know this much: that my wild capacity for empathy (including plants, animals, humans and the natural world) truly IS one of my most defining traits. 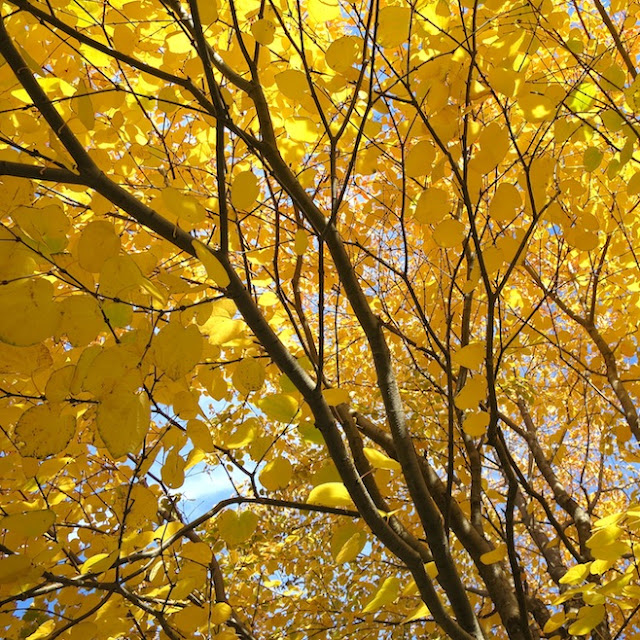 Before I can make good use of this ability, however, I must now wholly accept it in my life, along with despair, indignation, or hopelessness. And awe.

Then maybe I will grow new limbs to carry all these elements with me, eventually becoming a wider, stronger tree…

Rooted again in love, and able to hold space in compassion, for this wild and brutiful world.


Because love sustains us all, even the most sensitive creatures  :o)


Now tell me: how was your own eclipse experience?